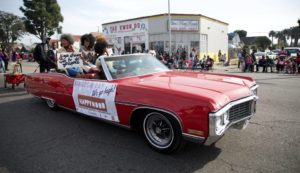 “Remembering the Beauty of Naturals,” was featured on NBC 4 and in the LA Daily News. The visuals of the protest reenactment radiated through the crowd of thousands with a vintage vehicle,  women wearing afros, and signage with a message of hope – “King’s Dream Was For All People.”