The nightlife may be for the adults but before the sun goes down there are still things to do in town, especially for the kids.

My 4-year-old nephew, Jahad was extremely excited to take pictures with the Disney characters. You know Iron-man and the rest of them, who haggle you to take pictures? Well his eyes lit up when he first saw them (particular Woody). And just like a non-New Yorker he complained about the City traffic.

Unlike his little brother, Jeremiah one picture wasn’t enough. Not for him, his mom or the street characters who came in groups of threes and fours. Oh, lord.

Remind you he’s four, so to our surprise he really wanted to take a picture with Morgan Freeman (the wax figure that is). I’m pretty sure he had no idea who he was, but everyone was doing it so he thought why not.

“I want to take a picture with him too.”

He was walking like a New Jerseyan, doing his best to keep up before getting picked up. And like a tourist he wanted to go to all the hot spots in the City…The Disney Store and Toys R US that is.

When it came time to eat we went with pizza (com’on its the best darn thing served here).

But then something happened…

A puddle of New York’s finest covered the floor board of the pizza joints second floor.

“Do you feel better?”

“Yeah.” He replied rubbing his stomach.

Their trip didn’t end there. One last stop, Forever 21.

No one shops there for kids but that didn’t stop Jahad from walking around with an arm full of clothing. We laughed but he was serious.

Awing at the moving screens of jumbo sized advertisements, it was absolutely stunning to him and his brother and any one walking by could tell. 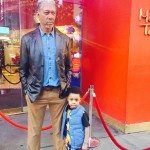 The big city excites us all, even those with little feet and big strides.

5 months ago Certainly Her